You are here: Home / ABOLITION

Duende has finished the second production of ABOLITION with strong box office and rave reviews in Sacramento. The Celebration Arts Theatre also provided our chance to perform to largely Black audiences. It was deeply moving to experience the enthusiasm with which they received us and the warmth with which they thanked us after the show.

To read the review that aired on KXJZ, the local, NPR, station click here.

Sacramento News & Review made ABOLITION their Pick of the Week and posted their review here.

Currently the next production has not yet been scheduled but exciting irons are in the fire, not to be revealed until the time is ripe.

ABOLITION tells the story of two friends, their accomplishments and their conflicts, during the tumultuous decade leading up to the Civil War. One of the friends is John Brown – he whose “body lies a-mouldering in the grave” – who led the raid on Harper’s Ferry, Virginia, a major stepping stone toward the War. The other is Frederick Douglass who was born a slave in Maryland, escaped to freedom at age 20, and became an important intellectual, journalist, political maven, and arguably the greatest American orator of the Nineteenth Century. The bond and the strife between these two men is explored in an intimate re-imagination of this crucial era in our fraught history. 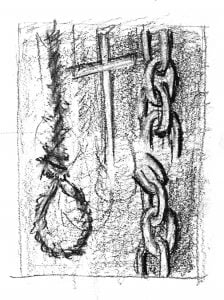 Read Rick Foster’s notes and background on the early lives of John Brown and Frederick Douglass, as well as a Thumbnail View of Abolition.

Help support completion of ABOLITION - The Film for distribution on PBS in 2022.

Double your giving! Thanks to a generous contribution from one of our supporters, your contribution will be matched dollar for dollar, to a maximum of $5,000.

Duende Drama & Literature, Inc. is a 501(c)(3) nonprofit corporation. Donations may be tax deductible and are processed securely through PayPal.

ABOLITION tells the story of two friends, Frederick Douglass and John Brown, during the tumultuous decade leading up to the Civil War. Produced as an acclaimed two-man stage play in Sonora and Sacramento, Duende is now in production of a broadcast quality film adaptation.

Learn more about the progress of the film version, as well as the historical background of the stage play.

Join our email newsletter and get advance info about special performances and events.